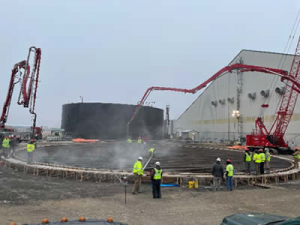 When you picture a typical December day in North Dakota, you might imagine snow as far as your eyes can see or feel a chill as you think of the wind that typically swirls through the prairie. What you might not imagine is multiple crews coming together to pour and screed a massive circular concrete pad. That is the exact situation Dave Goulet and Derek Klosterman with Industrial Builders, Inc (IBI) tackled head on. Now, this was not IBI’s first time working on a large, heavy construction site. IBI has driven millions of feet of pile in a region of North Dakota where the soil is mainly clay based, making them experts of installing deep foundations. When they were given the task of taking on a 112-foot diameter concrete pad, they were confident they could get the job done. Tackling that large of a pour in the middle of winter, however, was not something that is typically done.

Luckily, the 2020-2021 winter season had started relatively mild and the region had experienced unseasonably low snowfall. However, North Dakota weather can change drastically day-to-day. Dave and Derek knew they had to act fast to prepare the task ahead. The pad was being poured for Maple River Grain & Agronomy’s second 2-million-gallon liquid fertilizer tank. In the Red River Valley, many tanks are set on grate beams, directly on the soil. From the gate, the crews at IBI knew this was going to be no ordinary pour. Underneath the foundation of the tank, there were 92 individual steel pilings totaling, 8000 linear feet, that required the use of 41 tons rebar for reinforcement, courtesy of MidAmerica Steel (Fargo, ND).

To top it off, pouring concrete of this scale is highly unusual in this area during this time of year as the weather is often cold and unpredictable. IBI needed to move fast to get the job done to prevent any adverse reactions. Typically, they have a 3-4 day forecast to know whether they can pour. This is where, Dave says, the Lura Roller Screed came in: “To know that we could set up same day was huge. The set up and tear down process was phenomenal.” In the past, they have had set up take up a full day and upwards of 4 days to prepare for a pour and tear down would take an additional day. Using the Lura Roller Screed system, they were set up within half an hour. Further, they clocked their tear down and clean up time at only one hour.

With the prep work issue solved, the next challenge was the pour itself. The job involved a diameter of 112 feet of concrete to be poured and leveled in as fast and efficient of a manner as possible. To be on the safe side, Dave & Derek brought in three full crews to be on-site. They have achieved a similar circular concrete pour to this before, but it was done during summer using a truss system. If this were a summer concrete pour, using a system they had a lot of experience with, that number would have been much less. Given the possible weather conditions and the relative unfamiliarity they had with the Lura Roller Screed system, they wanted as many people handy as were available. When it came time to pour, however, their crew size was the same as a similar job they had previously done in a more optimal season. For the Maple River Grain & Agronomy job, they poured 760 cubic yards of concrete using 73 trucks from Aggregate Industry (Fargo, ND) within 5-6 hours! This was done with several Lura Roller Screed tubes threaded together 56 feet from the center to the outside of the pour to strike off in one pass.

Derek noted another option they had considered which was to use multiple Lura Roller Screed systems and pouring in two or three separate circles with more crew members raking. Through that method, multiple crews would be striking off in 20ft individual concrete sections rather than one continuous roller screed and circle. He did notice during the pour that the crew working in the center had to work hard to rake the concrete with the length of screeds together. Going into the pour, they knew this would be a possibility so the solution that was suggested was to incorporate the CV Joint and Pulling Eye in the middle of the tubes, which was something unique to their pour because it allowed the screeds to be pulled at the center without any binding. The attachment that made all the difference for IBI, though, was the Grain Bin Bearing/Center Pin Pivot, which allowed the crew to “plug and place, pop it in and go.” IBI says now that they have had experience with the Lura Roller Screeds, they would have reduced their crews significantly. According to Derek, “Where we saved the most man-power was with the set up and take down. Minimal set up, easy clean up and tear down. Time saved.”

The final challenge was protecting the large surface area poured. Typically, this involves the use of several chemicals but that was unnecessary with this concrete pour due to the colder temperature. To protect their pad, the IBI crew followed API cold weather specs on mass concrete and kept a close eye. They made sure to prevent the concrete from getting too hot in the beginning and let it gradually cool, being careful not to shock the concrete. Once they were in the clear and the concrete was set, the result for the crew at Industrial Builders was a sturdy & level massive circular concrete pad capable of supporting 2 million gallons of liquid fertilizer.

As contractors, you know that no two jobs will be exactly alike. Surprises can make or break you and your crew. Looking back on the pour, IBI stated the key factors in completing this job fast were the preparation and tear down time and knowing that there are various roller screed attachment options available within the Lura Roller Screed system. Having a knowledgeable network of concrete industry suppliers ready to supply you with quality products makes a difference with your crew, your bottom-line and, most importantly, your client.